The ones who didn't beat him up preferred psychological torture. They presented themselves as doctors, nurses, research students, scientists, and asked him irrelevant and dim-witted questions in the most matter-of-fact tone, as if his responses really mattered; as if, indeed, he were being tested.

"Can you tell me how you change a tire?"

"How does one go about cooking scrambled eggs?"

"What do you do when you go grocery shopping?"

"Can you explain to me, step by step, how to shave?"

He tried not answering, but whenever he stayed silent the ants deafened him with sarcastic or obscene suggestions.

I'll change your tire you stupid prick you take your eyeballs and throw them in a frying pan I buy cauliflower and your mother's cunt well you start by cutting your dick off with a razor.

Talking was the only way to keep the ants quiet.

Usually these joggers accosted him in pairs, always when he was sitting behind a table—so he wouldn't be able to run away. They gave him colored pens and paper, or blocks of different sizes, or a jar full of poker chips, and sat back and watched what he did with them. One of them always took notes on a clipboard which they kept tilted away from his sight. Sometimes they asked if they could set up a camera and record him. They always asked his permission in the sweetest, most solicitous voices. He recognized this as sarcasm. They were only emphasizing by contrast the brutality of the other joggers. And he knew that if he said no thank you, he'd prefer not to be recorded, or to fill out another form, or to answer their questions, they would proceed anyway, thereby flaunting their power over him. They wanted him to exercise his freedom so that they could revoke it with a laugh. But he was too clever to fall into their trap. He "chose" to play along. This gave him some feeling of independence.

He was stuck behind a table. On the table were three sharpened pencils and a stack of paper. The pencils were neatly perpendicular to the edge of the table, and the paper was neatly parallel. (That was how he knew that they were Taylor's minions.) The first thing he did, under the pretense of admiring them, was disarrange these supplies—but only subtly, giving them no excuse to assert their authority.

The new piece of paper had a design on it. 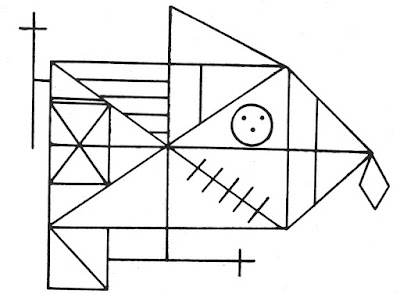 Drew said, "It looks like a bowling ball riding around in an old patched-up spaceship."

The women however were not pleased. The one with the clipboard didn't know what to do. The one without, who seemed to be here in some supervisory capacity, took charge.

"Drew, this is not a Rorschach blot. This is a complex figure test." She became flustered, as if she'd said something she shouldn't have; she glanced sideways at the woman with the clipboard, who seemed not to have noticed the indiscretion. "What I mean is—please wait for the instructions."

He picked up a pencil appraisingly. "Am I supposed to draw it or something?"

The ants chattered appreciatively. The women exchanged a glance of incipient hysteria. The one without the clipboard jabbed her finger violently at the clipboard. The one holding it picked up again:

"Now," she read, not modulating her voice at all, "what I want you to do is copy what you see here—"

She paused long enough for the woman without the clipboard to lean forward and point at the complex figure.

"There—as exactly as you can."

He paused. The ants held their breath. "What's the matter?" he asked.

The women conferred in whispers. The one without the clipboard at last turned to him with an almost defiant look. "Do you, ah, need to rotate the sheet of paper so much? I mean, is it ..."

She grabbed the clipboard out of the other's hands and consulted it.

Drew paused to consider this. Too long: the ants began shouting their own responses. Godfucking right it is bitch is there any such thing as a comfortable writing angle how long have you been part of this jogging group why don't you ask your friend here to leave and ask me that again tell her to fuck off kill the bitch kill the bitch kill the—

Drew said in a loud voice, "I am not listening to that so forget it!"

On other days it was two men, or one man and a woman. Today it was a woman and a man.

I'll understand you, said an ant.

Sometimes it was hard to concentrate. It was often hard to concentrate. He felt as if each of his thoughts had a weight tied to it. His feet too were filled with cement. Taylor and his cronies poured it in through the roof while he slept. It could not be detected by the doctors here. (Some of them really were doctors, or had anyway studied medicine to aid the impersonation.) The concrete could not be detected by the doctors here because it only existed on the cancer-map—which was below the surface of the sky-ocean, where electromagnetic energy was still implicate, or implied. But all Taylor and Xing-Xong need do was surface a single bubble of concrete and Drew would die of an embolism. This did not worry him as much as the hydrops.

"Are you hearing voices?" asked Dr. Hutch one week, this week, last week, every week.

No no no no no, cried the ants.

"It depends what you mean by voices," said Drew warily.

"Just match the card to one of the four other cards," said the meat-robot again, in the exact same words and exact same tone. You could distinguish meat-robots from holograms because they never got bored, never minded repetition, did not even seem to notice it.

Drew was waiting for a real person to visit. There was no point in telling meat-robots or holograms about the plot against the President.

Besides, he had learned that the surest way to get three sessions of hydrops was to mention the President.

Sometimes he thought Dr. Hutch might be real. It worried him. Because Dr. Hutch was an idiot.

There were four cards on the screen. One had two blue crosses, one had three blue squares, one had a single red circle, and one had four yellow triangles. The card at the bottom of the screen, the one he was supposed to match, showed a single green triangle.

"Alright, but on what principle am I supposed to match this thing?"

"I will tell you 'right' or 'wrong.' I am sorry but I cannot give you any other instructions. Just match the card to one of the other four cards."

"That was ... wrong. Please proceed to the next card."

The meat-robot was apparently not programmed to process that comment. He pointed at the screen.

Someone, somewhere must be analyzing Drew's answers. Taylor, or one of his cronies. "One of the CEOs of Landsend Logistics," he said aloud. The meat-robot wasn't programmed for that. Drew didn't know what to do. Should he try to solve this puzzle? Or should he intentionally flub it? But to flub it, he would have to solve it. "Christmeat, Taylor's a crafty motherfucker. Sorry—that was the ant." The meat-robot nodded and pointed at the screen.

Drew matched two blue circles to a single red triangle, just to make Taylor or Dr. Hutch, or whoever it was monitoring him remotely, think that he was dumber than he was.

He matched something to something and said, "You'd tell me if I got it right, right?"

"Please proceed to the next card."

Fucking child's play do they really think they can you showed him a thing or how old do you have to be to ride this matched a blue circle to four red circles right three green squares to four red squares right three blue crosses to one green cross right cakewalk in the park four yellow triangles to two blue triangles wrong.

"What the fuck do you mean, wrong?"

"P-please continue to the next card." He was flustered. Maybe he was a hologram after all.

"It's shape, you match the shape, I was matching the shape regardless of number or color and right right right, now you're telling me it's wrong, what kind of bullshit experiment is this?"

"Please, sir, proceed to the next card."

They change it on you! one of the ants shrieked. The low-down dirty fuckers change the rule on you as soon as they realize that you've figured it out. Don't play their filthy little game!

"I've got nine of these altogether," the man said. "I'm going to show them to you one at a time and your job is to copy them as exactly as you can. Do you understand these instructions? Do you have any questions? Then let's begin. Please don't touch the card."

Does it have to be the exact same size?

"Just copy the card as exactly as you can."

I just want to know what I'm being graded on here.

"Just copy the card as exactly as you can."

Are you going to grade them yourself or does somebody else do it?

"Just copy the card as exactly as you can, please."

You said please that time.

"I beg your pardon?"

I thought you were a recording.

"I beg your pardon?"

"Just please copy the card as exactly as you can."

Does the thickness of the lines matter? You've given me several sheets here; should I do one per page, or all nine on one page?

"I can only give you these instructions. The rest is up to you."

"Very good," said the meat-robot, and snatched Drew's drawing away without looking at it.

"Very good," he was always told when he finished; but no one ever explained to him what any of this was supposed to measure, or how well or poorly he had performed. He never saw any of his drawings, any of his test pages, any of his questionnaires again. No one explained anything to him.

He became convinced that no one was analyzing any of his tests. This was all just a distraction, a smokescreen. They were going to keep testing him and testing him and filing his tests away, cramming all this data into filing cabinet after filing cabinet, so that if one day a real human came around asking for him they could show this human where all his tests were kept and triumphantly say, "Now really, my friend, would a sane man have produced all this shit?"

So he decided to stop participating. He just sat there, making buzzing noises with his tongue and teeth to keep the ants' voices at bay. The meat-robot turned to the hologram and said, "This one's gone catatonic."

"Are you hearing voices this week?" asked a hologram that bore only a superficial resemblance to Dr. Hutch.